We’ve been a part of the effort to launch a Waterfire in Riverhead since 2014.  Learn more here. Our Winterfest Wine tour began at The Hotel Indigo where participants met and waited for the bus, we stopped briefly at The Hyatt Hotel to pick up a few more passangers as we settled in our seats on the bus you could feel the relaxation process beginning, Kristen briefly told us the agenda for the day and we were on our way. Our first stop on the tour was The Pellegrini Vineyard’s, a beautiful 14,000 square foot venue that makes some of the tastiest wine! We were greeted at the entrance by friendly staff members then ushered inside where we were given a complementary glass of wine with the option of a 2015 Rose or a 2015 Chardonnay.

Through out the two floors of the building our guests were seated and able to enjoy the relaxing melodies of the Jack Morelli Music band, playing some jazz, hits from the Beatles and much more. During the intermission we were able to talk with band members as well as go explore the grounds. It was an exceptionally warm day in February and most attendees walked through the vineyard acres, some cozied up in the gazebo that was just a few feet into the rows of vines. Others found nice spots in the sun to relax, sip their wine and have a little snack! The wine cellar was a particularly cool spot (literally). Barrels were lined neatly along the walls of the cellar waiting to be bottled and enjoyed, it was quite an amazing site to see the finished/unfinished product and how it is stored. The couples enjoyed the break by talking and getting to know unfamiliar faces. Once the band started up again we headed back into the room to listen. At three the group met at the bus eager to see what the next vineyard had in store for us, the atmosphere of the bus changed on the way to stop number two Martha Clara Vineyard. Everyone was a bit chattier this time around being that they had time to get to know each other and have some wine in the mean time! When we pulled up to Martha Clara everyone was eager to get off the bus and see what makes Martha Clara so wonderful. We got to walk through the small market they have on sight and the recently opened dining room, to the back patio where family’s, friend, couples, and even some dogs were hanging out enjoying the beautiful Saturday. We made our way to a separate room for a private wine tasting with the winemaker himself, Juan Micieli-Martinez. We all took our seats at the tables and admired the small sample of wine pre-poured for us. Juan started off by giving some background on the vineyard and himself then we dove into the wine tasting experience, The first wine we tried was a 2016 Sauvignon Blanc that was straight from the barrel also known as “raw” wine. Juan explained the difference of bottled and raw wine then let us sip the sample and mingle. The next two we tasted were the same wines just prepared differently, first we tried a 2014 Chardonnay that was fermented in a stainless steel tank and the next was prepared in an oak barrel. There was actually a noticeable difference in the two; the stainless steel bottle had a softer taste to it while the oak bottle had a strong taste that it adapted while aging in the oak barrel. Juan explained the difference between both wines and why the barrel prepared bottle had that strong taste then he opened the floor up to any questions we had. After a little break we moved on to the reds, the first bottle we tried was a 2013 Merlot, then a 2013 Northville Red. While sampling the last of the reds, Juan showed us the proper way to evaluate a glass of wine from the swirling of the glass to “getting your nose right in there” and then told us about 14 different types of grapes they use to make their wine. After the tasting was over we were able to go out to the balcony that overlooked the vineyard and stables.

We had a little time before going to Dark Horse for dinner so Kristen asked the bus if they would like to stop at LI Vodka for a quick drink and then out the door to dinner, with a roaring yes we were off. At LiV there was an awesome band playing classics like Sweet Caroline and Winterfest attendees were able to let loose dance and having a drink. The entire atmosphere of the bus from the beginning of the day to the ride to dinner completely changed, it started of a bus of strangers to a bus of friends singing “Party in the USA” as we pulled up to Dark Horse. We got VIP treatment while being escorted to our private dining room, the party began the minute Kristen plugged her phone into the AUX cord, everyone danced and mingled while waiting for the first course to be served and continued that in between courses. The hardest part of the evening was picking one of the several delicious options for the main course, and then trying to finish the mouthwatering inside out apple pie for dessert.

Unfortunately the day had to come to an end at some point as we dropped off the few couples at The Hyatt and then returning to Hotel Indigo where the few remaining joined Kristen downstairs to enjoy the rest of the Bakithik Kumalo concert. 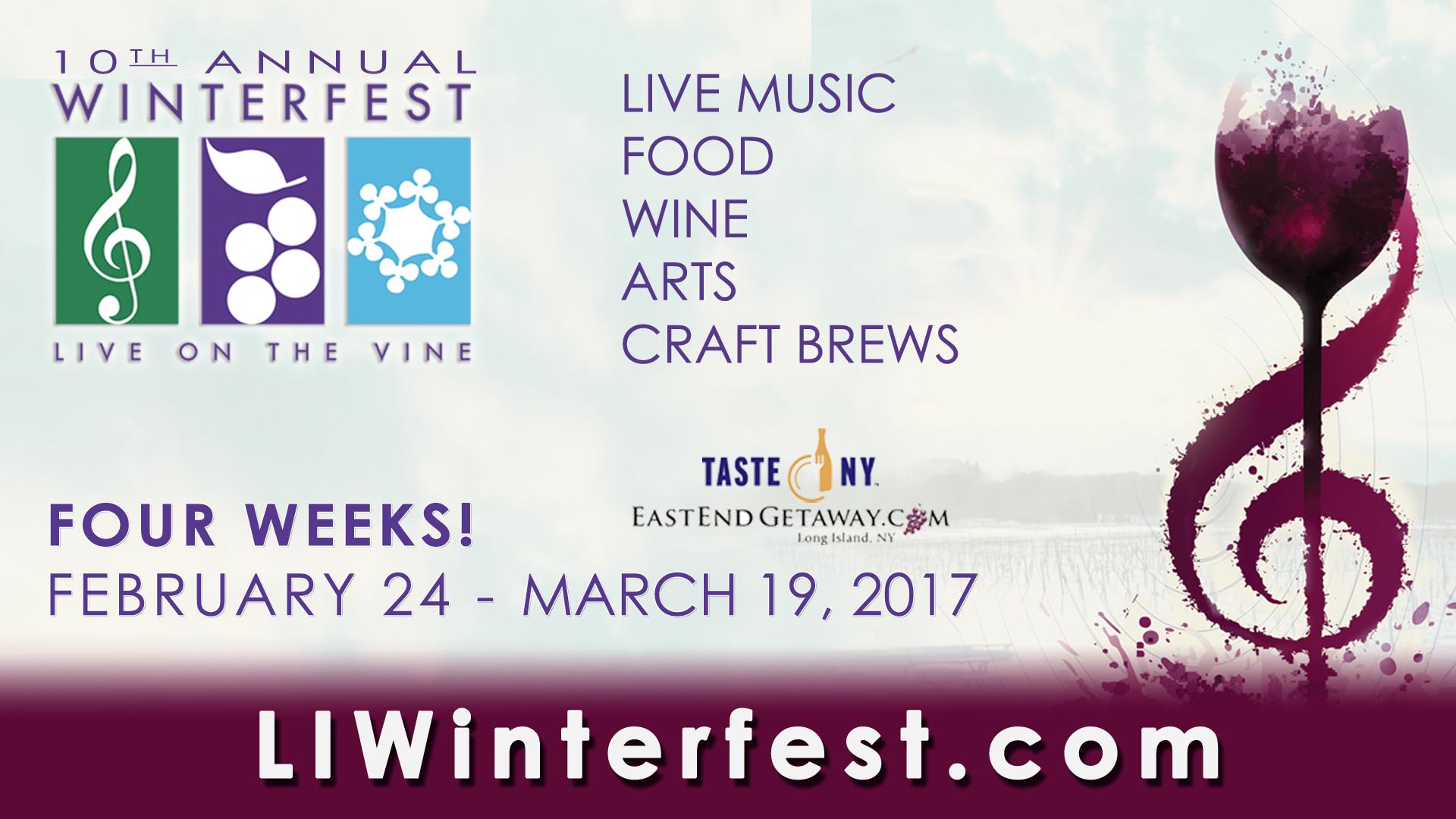 Meet the great people on the East End and all around. Main Street Agency is honored to be the marketing coordinator for this event and all creatives.

Entering its 10th anniversary year, Winterfest is poised to continue within a new framework that broadens the benefits to the entire East End region of Long Island. In 2017, Winterfest will be managed by a steering committee representing a broad collective of businesses reflecting the East End of Long Island including wineries, breweries, restaurants, hotels, performing arts, art galleries, and retail businesses. Music offered during the festival will be arranged by host venues.

Winterfest – Jazz on the Vine 2012 is awarded the “National Destination Marketing Award” by Americans for the Arts and Destination Marketing International. This prestigious award was important to validating our work and our vision, which has now increased the amount and types of events, and is expanding our overall musical selection. Winterfest will now encompass not only talented emerging artists, but has added to its multi-genre schedule top name artist’s in a wide variety of musical styles including: jazz, folk, singer-songwriter, country, soul and more.2016 will widen the fests scope even more by adding an exciting schedule of non-musical events, including “The Art of Wine”, food and family events.

What You Can Expect:

Over 70 performers, and 25 events in over 30 locations, you will experience the best music in a diverse menu of styles, east of NYC. Drink delicious and rare wines, enjoy local specialties and end the night at one of our romantic hotels and B&Bs! You can spend an afternoon or weekend with us, or come for the entire festival!

We hope you will join us!